1 I say then, Hath God cast away his people? God forbid. For I also am an Israelite, of the seed of Abraham, of the tribe of Benjamin.

2 God hath not cast away his people which he foreknew. Wot ye not what the scripture saith of Elias? how he maketh intercession to God against Israel, saying,

3 Lord, they have killed thy prophets, and digged down thine altars; and I am left alone, and they seek my life.

4 But what saith the answer of God unto him? I have reserved to myself seven thousand men, who have not bowed the knee to the image of Baal.

5 Even so then at this present time also there is a remnant according to the election of grace.

7 What then? Israel hath not obtained that which he seeketh for; but the election hath obtained it, and the rest were blinded

9 And David saith, Let their table be made a snare, and a trap, and a stumblingblock, and a recompence unto them:

10 Let their eyes be darkened, that they may not see, and bow down their back alway.

11 I say then, Have they stumbled that they should fall? God forbid: but rather through their fall salvation is come unto the Gentiles, for to provoke them to jealousy.

KEY VERSE: “I say then, Have they stumbled that they should fall? God forbid: but rather through their fall salvation is come unto the Gentiles, for to provoke them to jealousy.” – (Romans 11:11)

It has occurred in several life instances that a supposed winner is eventually disqualified at the final decision point for failing in one criterion or the other. This kind of scenario has occurred in sporting, political, social, academic, business and other events. In such an instance, the runner-up is selected as a replacement or a fresh selection process is ordered. Each game or life-event has its way of qualifying beneficiaries; so does the kingdom of God.

Israel was God’s chosen nation. He is the descendant of Abraham, the father of faith. God places high premium on him. He literally brought the people up, cared for and favoured them. However, Israel’s response to God’s care was like that of a ‘spoilt child’. They took it for granted and treated His laws with disdain until He was fed up with them for ignoring several of His warnings. He had to set them aside. This gave a great opportunity to the Gentiles who were not of the commonwealth of Israel to enjoy great intimacy with God by adoption into sonship through the Lord Jesus Christ. God did not intend to cast Israel off forever because “Israel shall be saved…” His purpose for putting them aside for now is to give room for “righteous” Gentiles and to provoke Israel to jealousy so they can seek righteousness and be saved.

Like Israel, a person or a congregation may have been enjoying God’s favour and presence for a long time and eventually take these for granted. These privileges can be withdrawn in the twinkling of an eye. Retaining God’s favour is conditional. As there is room for Israel to regain their earlier favoured position if they respond to God’s overtures, so is there room for those who are cast away to repent and return to God. Those who are enjoying His great care should take heed. If He cast Israel aside, He can do the same to us if we fail Him.

THOUGHT FOR THE DAY:
Take heed; nobody is beyond a fall.

THE BIBLE IN ONE YEAR:
Deuteronomy 7-9 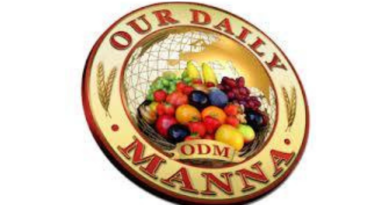 DCLM Higher Everyday 5 February 2023 — I shall not die